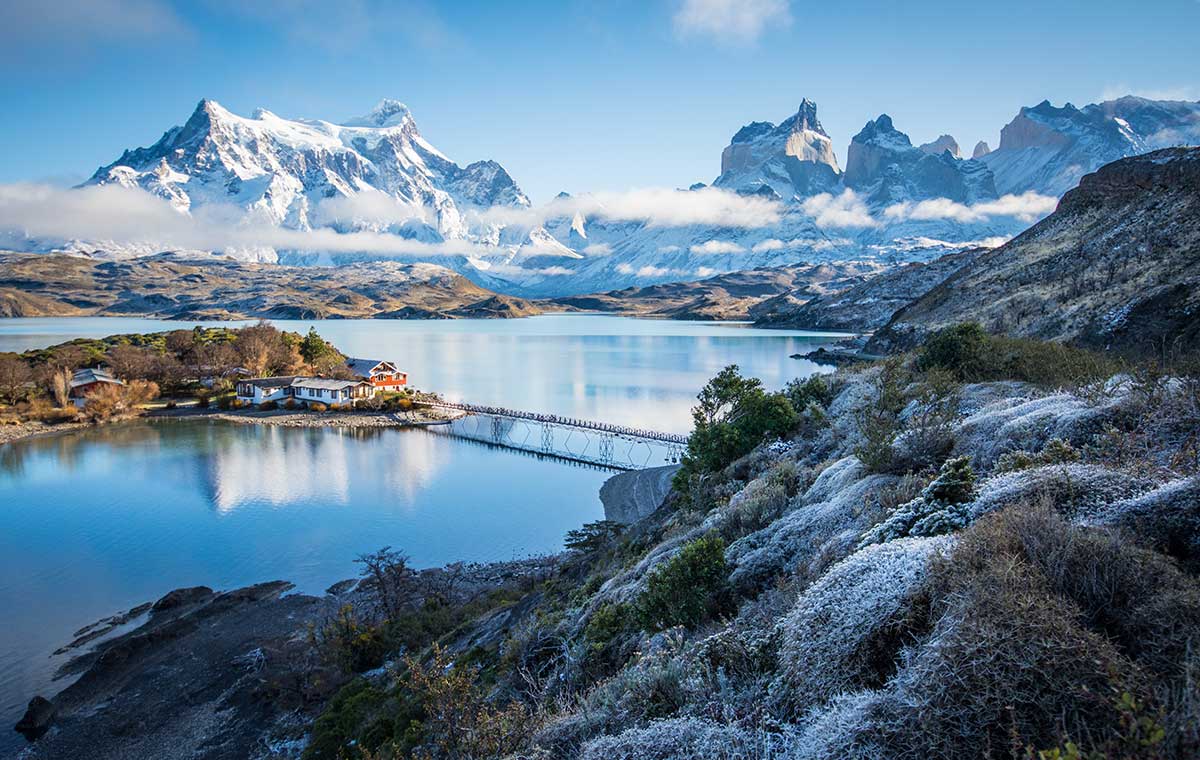 If you’re thinking of planning a holiday in Patagonia you might as well set aside some annual leave every few years because you’re going to want to return again and again. I’m currently enjoying my third visit and I can already clearly see outlined the itinerary of my fourth. There may have been a few years in between trips but there aren’t many places in the world that I keep coming back to. I generally prefer to explore new frontiers, which isn’t hard in this big and beautiful planet we call our home, so what is it about this region that keeps drawing me in?

Well, everyone has their favoured landscape and mine involves pointy mountains, frozen lakes, crumbling glaciers, towering fjords and all things jagged and capricious. Patagonia is a vast territory split between the south American countries of Chile and Argentina. Much of it is flat, featureless grasslands or pampas, inhabited only by unusual creatures like guanacos, rheas, Patagonian bursting rabbits* and sheep farmers, but it is around the edges and through the centre that this land really excels. Patagonia can be defined by its water, whether glittering flat in the sun, floating past in frozen blocks, pristine and shining white on the flanks of a soaring mountain or even tumbling in the slow-motion flow of a powerful glacier. As such, the northern and southern Patagonian ice fields together make up the repository of much of the planets remaining water reserves outside of the polar regions. The region borders three of the globe’s five oceans.

The land takes its name from the legend of Patagón, meaning big feet, the name given to the indigenous Tehuelche people encountered by the explorer Ferdinand Magellan on his voyage of discovery in 1520, on which he first navigated the Straits of Magellan and opened a trade route to the far east. Reports described these people as being 3m tall, sometimes headless and with mouths in their chests by which they would devour unlucky castaways. Fear not, I have never seen these people, undoubtedly the result of sailors’ imaginations run riot.

So where to start enjoying this wonderland? While not in the league of our own fair homeland, Patagonia is large enough, around 1,000,000 km2, that putting together an itinerary is bewildering. Most people on their first visit, as I did, focus on the big name destinations: Ushuaia, the southernmost city in the world; Perito Merino, the world’s most accessible advancing glacier; the national parks of Fitz Roy and Torres del Paine, trekking paradises; the wildlife wonderland of Peninsula Valdez. That’s two weeks, right there, and you’ve barely scratched the surface.

Of course, Ushuaia is the departure point for 90% of Antarctic cruises, and if that’s always been your dream, factor in another fortnight to tick that off your bucket list. Should Antarctica not be within your means, Patagonia comes a close second. It’s like the 7th continent’s cheaper, more accessible brother. Both Chile and Argentina even claim, despite signing the Antarctic Treaty of 1959, ownership of large overlapping chunks of terra incognita. The Chilean state of Cabo de Hornos has its capital in Puerto Williams and includes Cape Horn as well as 1.25m km2 of Antarctica, a territory almost twice as big as its mother country!

The abiding memory of my first visit here is the face of Perito Moreno glacier, serrated and vertiginous and shot through with icy blue streaks, house-sized chunks detaching themselves and falling slow-motion into Lago Argentino with a resounding crack and splash. Constantly calving, I watched it for two days, gobsmacked by the power of nature. Peninsula Valdez is famous for the killer whales that erupt onto the beach to catch sunbathing seals unaware and reverse-shuffle away with their tasty snack. Although you might be lucky to witness such a kill, there is plenty of other wildlife to be spotted there: elephant seals, sea lions, southern right whales, Magellanic penguins and a host of other birds.

Going back to mountains, the trekking circuits of Torres del Paine – the three to four day ‘W’ and the eight day ‘O’ – and Fitz Roy are world famous. Many people travel to the region purely for those, and who can blame them? The sight of the four fingers, or Torres, reaching skyward from their turquoise lake home, high in the Andes, stays with you. I’ve personally done the W twice.

Most of what I saw on my first trip was in Argentina, so since then I’ve been looking more closely at Chile, much of which can be summed up in a word – fjords. The sheer complexity of Chile’s southern coastline is astounding. On a map it resembles the splatter pattern of a dropped can of paint: 6,500km of coastline along with over 5000 islands comprise a maze of channels and cul-de-sacs so confusing that it took hundreds of years for that region of the map to be completed, and fortunate that it has been, for it allows luxurious modern cruise ships to navigate tourists through days of stunning scenery. The Stella Australis, which I took on my current trip, moved expertly through this landscape, stopping off once or twice a day for shore excursions in Zodiacs, alternating with illuminating lectures on history, geology and the exploration of the area. Meanwhile, the food, lounges and cabins were bliss to return to. I would recommend it to anyone.

Our cruise culminated in a visit to Cape Horn, the last land before Antarctica. The stuff of legend, this was for hundreds of years the only way to cross from the Atlantic to the Pacific on the way to the Far East. Large cargo ships couldn’t easily navigate the Straits of Magellan, and hundreds were wrecked before the discovery of the Beagle Channel in the late 1820s. The Beagle was the ship that carried naturalist Charles Darwin for five years, and it was his discoveries in this region that informed his groundbreaking work on evolution, On the Origin of Species (1859). He wrote of his first sight of the channel’s glaciers: “It is scarcely possible to imagine anything more beautiful than the beryl-like blue of these glaciers, and especially as contrasted with the dead white of the upper expanse of snow.”

Other fjord cruising options thread through the passage between Puerto Natales and Puerto Montt, gateway to the Lakes District, such as the four-day Skorpios III voyage. This region is where the smaller, less well-known spaces hide, of which there are many, including Chiloé Island, Osorno and Pucón. On my second visit I went to Parque Tagua Tagua, a gem of a park hidden near the Argentine border. Upmarket luxury was the name of the game there, the refurbished estancia, or sheep farmer’s mansion, base for all sorts of activities, both sedate and extreme.

If you’re worried about logistics and comfort, make no mistake – Chile and Argentina are first world countries. Apart from the odd political disturbance here and there, travel through the region can be as streamlined and comfortable as anywhere in Europe. Wifi is available, though not always reliable, even in the smallest towns, and cash machines or eftpos present and correct. Personal safety is not an issue. In all the time I’ve spent here, I’ve never felt threatened, even in the big cities at night. Stay sensible and you won’t have to think about it at all.

In this post I’ve confined myself to the Patagonian regions of Chile and Argentina. Venture north of the Lake District, up to and past Santiago and Buenos Aires, and you open up a whole other world of beaches, desert, volcanic landscapes and waterfalls, all of which are a delight to explore. Ant then there is the Bolivian Altiplano and Amazon Basin, but that would be way off topic.

So, what bodes for trip number four? In two words, I’m thinking the Carretera Austral – 1200km of road, mostly tarmac, through the remotest regions of coastal Chile. Ruta 7 is an unofficial branch of the Pan-American Highway that runs from Alaska right down to Ushuaia, save only a small section between Panama and Colombia. If you’re feeling adventurous, take it on. When will I do this? I’ve no idea, but I’m confident it will come around sooner or later. I’ll let it happen naturally. One thing’s for sure, I know that when I do, it will be, as it will always remain, in the words of Billy Connolly, Windswept and Interesting.

Dan Slater is a Sydney-based travel writer with a passion for the outdoors and adventure. Dan travelled through the Patagonian fjords on board the Stella Australis as a guest of Eclipse Travel and Australis.

You can see our range of Patagonia tours here.

If you want to find out more about the destinations in this article, or have any questions in general please contact us.