Explore the unique Siberia's eastern coastline as we enter one of the most remote regions in the globe. This amazing 15 day expedition takes you to the beautiful coastline dominated by the volcanoes of Kamchatka in the south, the fiords of what was formally called the Koryak region and the rich estuarine areas and tundra of Chukotka. You'll be introduced to one of the most diverse assemblages of wildlife including brown bears, red fox, along with the region's most iconic species- Spoon-billed Sandpiper, as well as spotting some of the incredible marine mammals from walrus to Beluga whales. 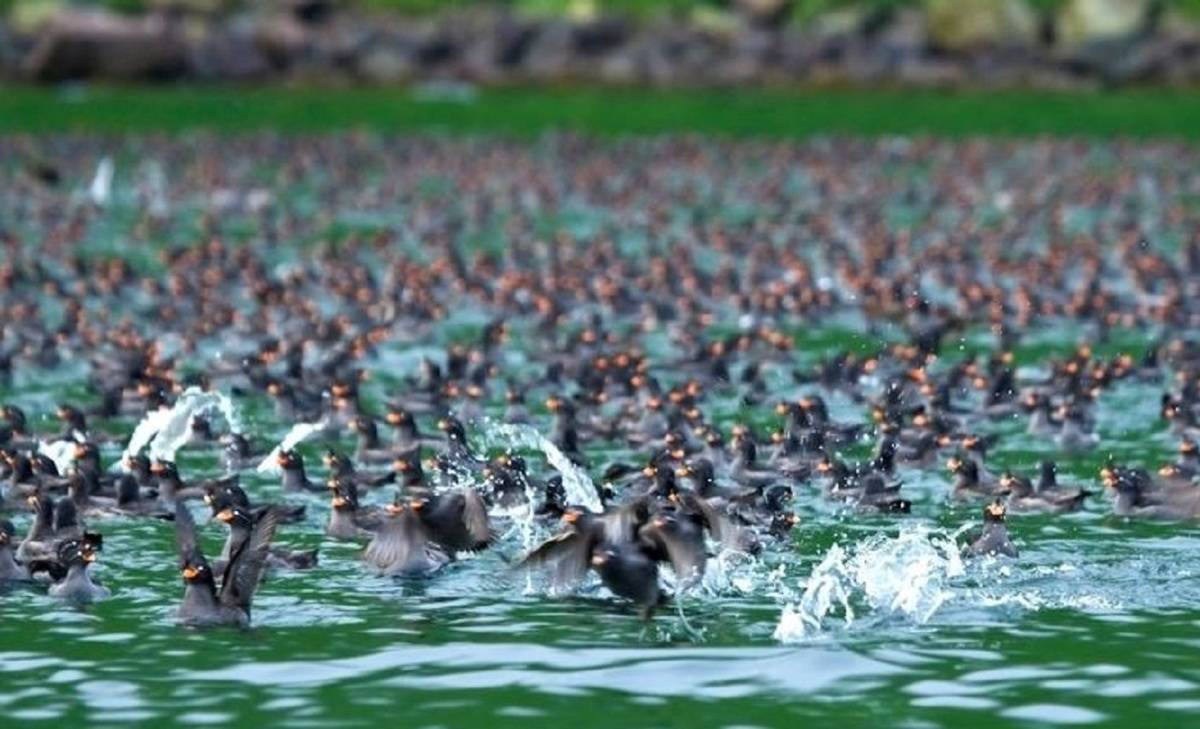 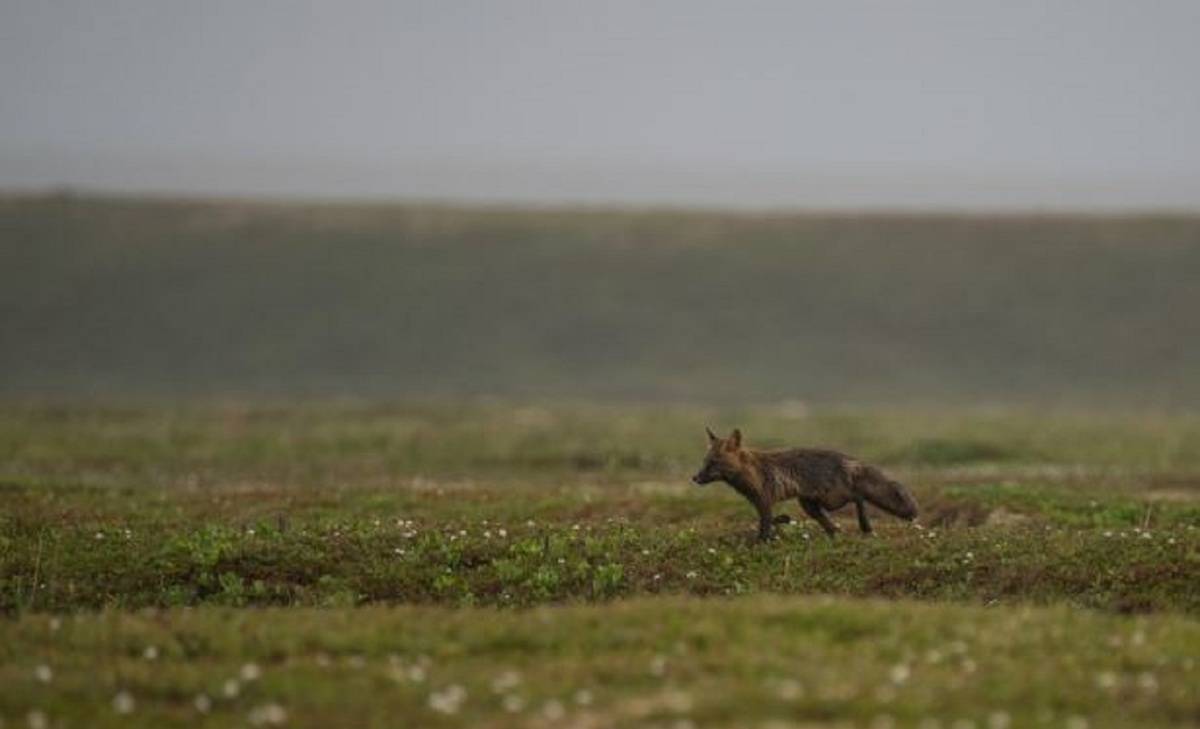 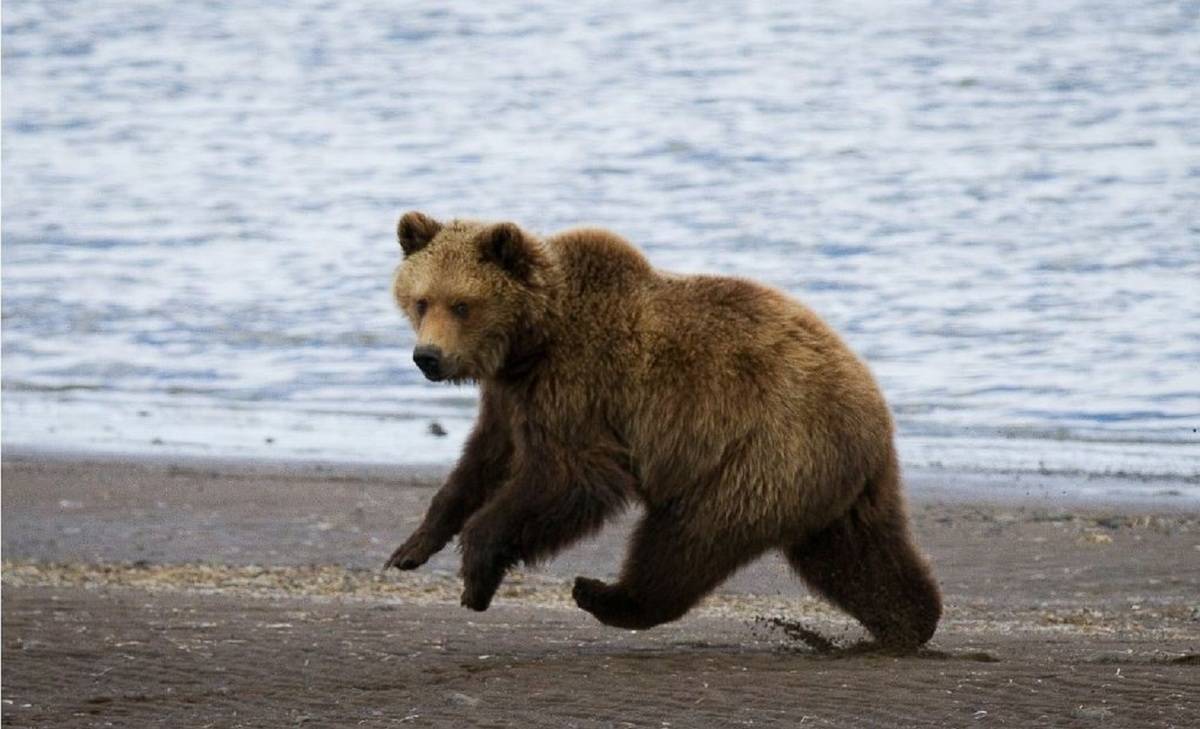 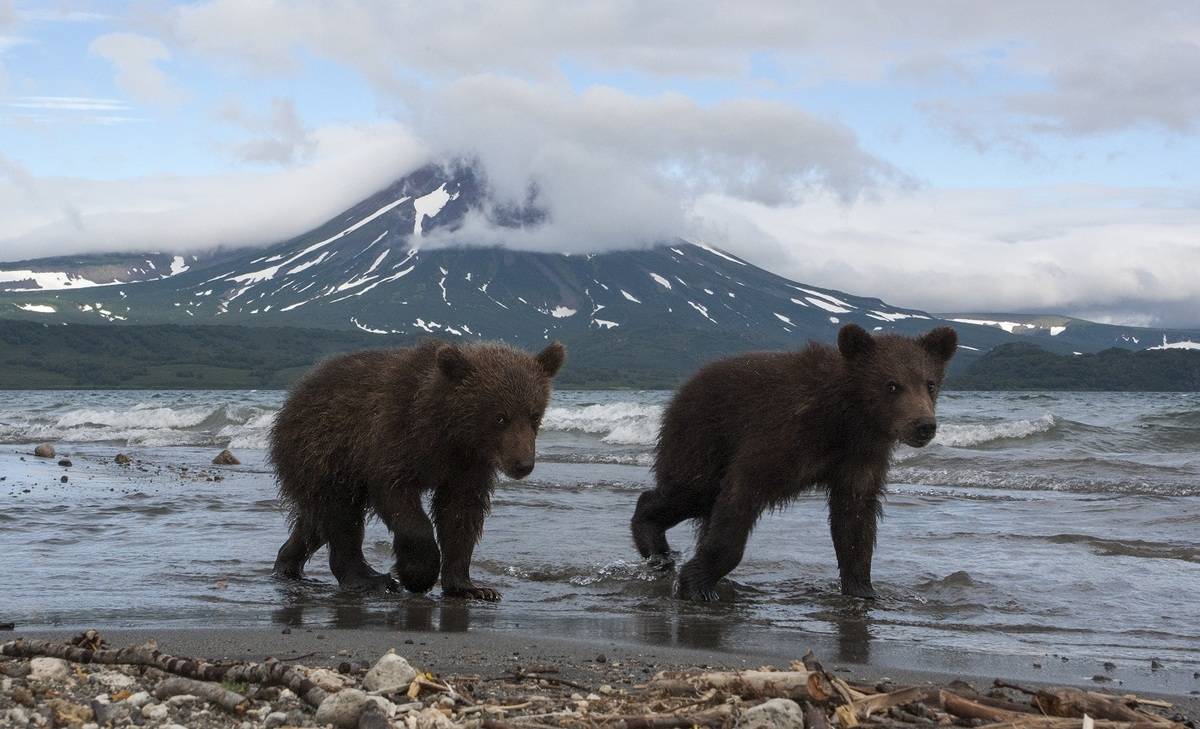 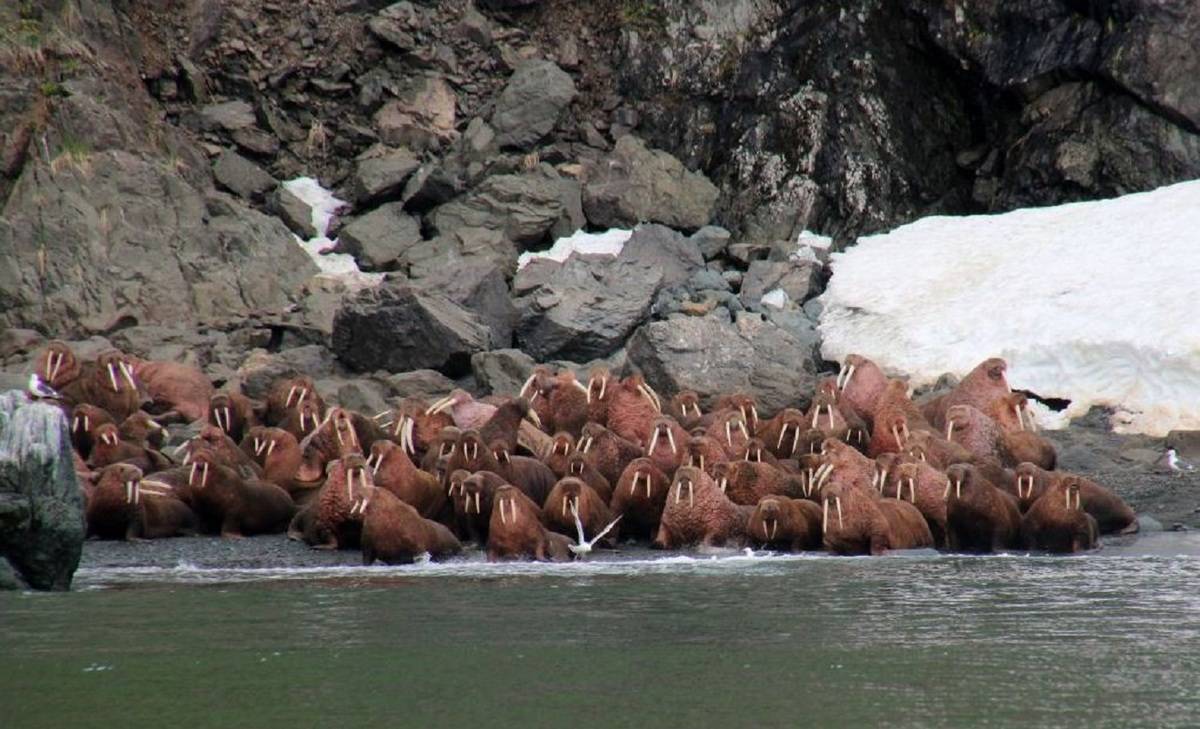 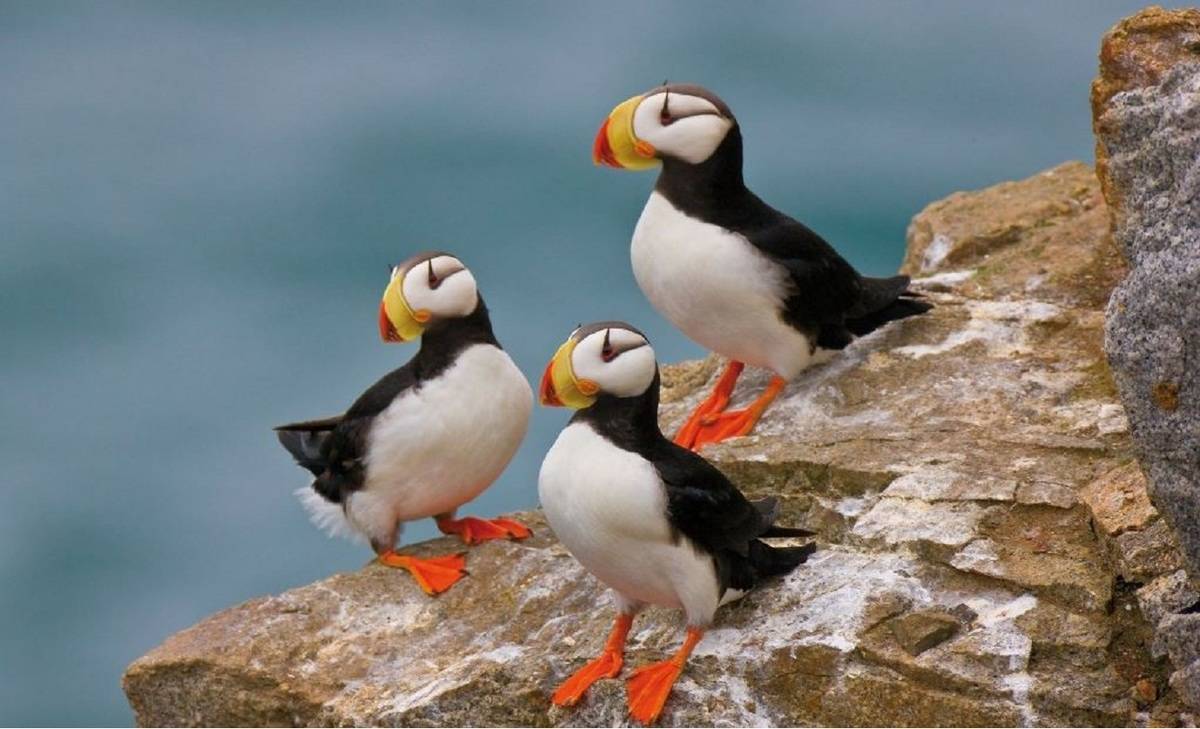 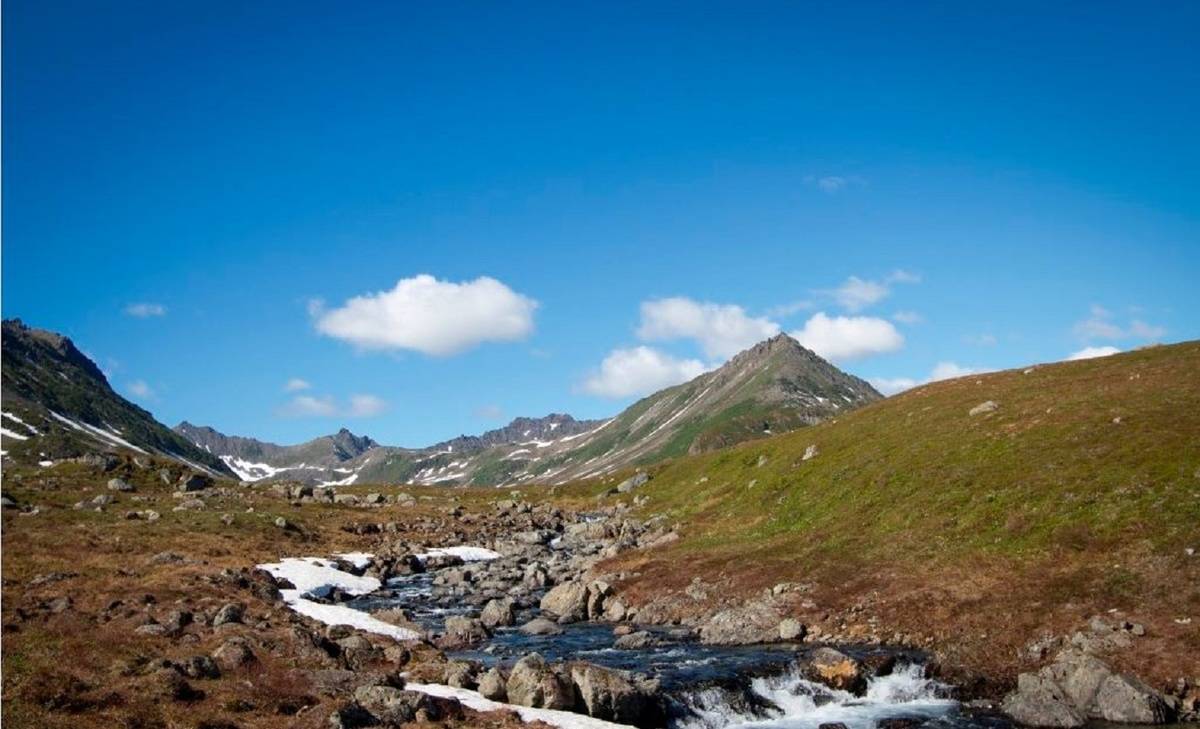 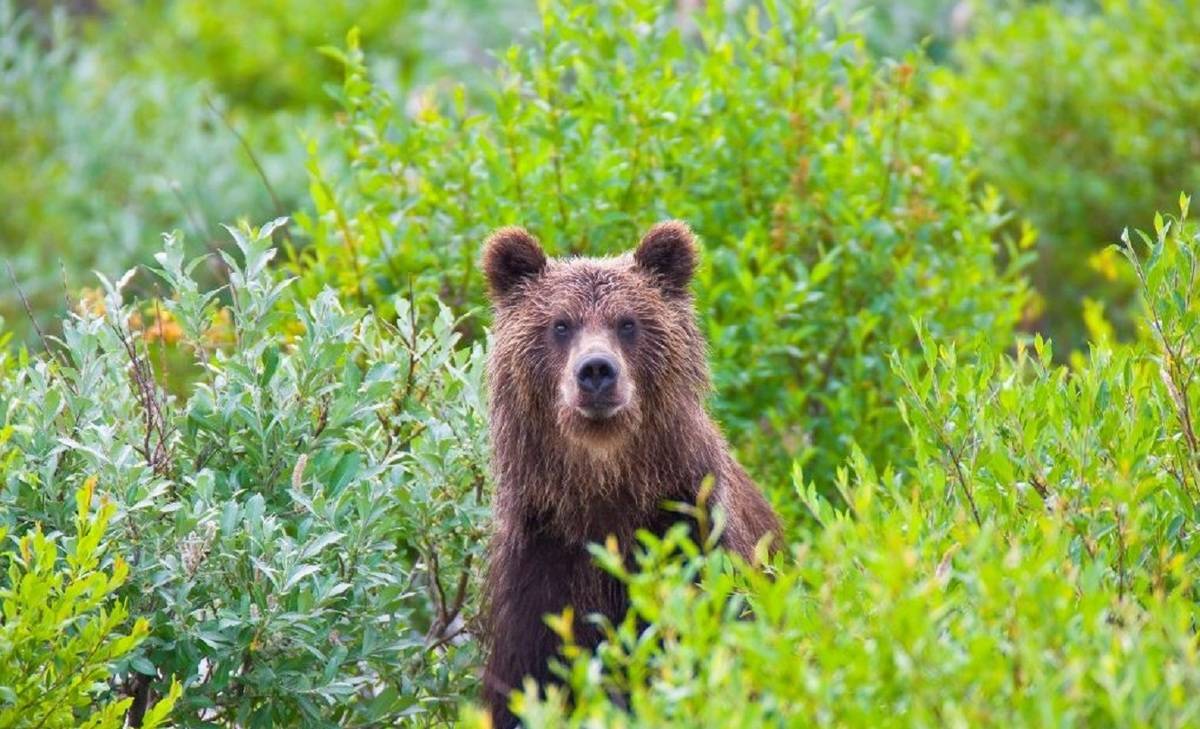 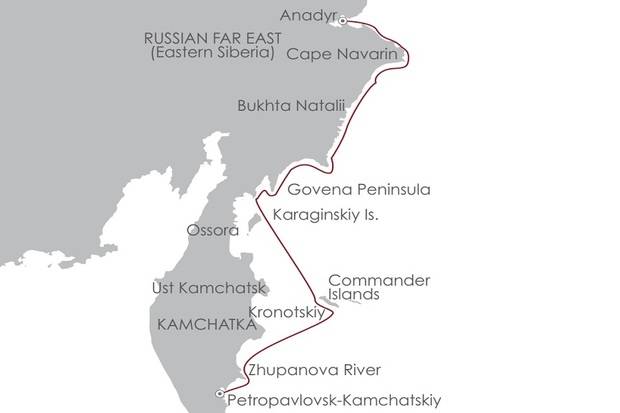 Arrive into Petropavlovsk- Kamchatskiy, the capital and administrative centre of the Kamchatka Region and transfer to the port to board the ship. We suggest you arrive at least a couple of days earlier and spend some time exploring the area. We can help you with accommodation and tour options including the world famous Valley of the Geysers. It is an historic town and there a number of museums and monuments worth visiting.

We plan to spend the morning Zodiac cruising on the Zhupanova River. Our main target here is the Steller’s Sea Eagle and there are usually some occupied nests close to the river. Good numbers of Largha Seals are also often hauled out on sandbars in the river and we should see a good variety of waterfowl and waders. By late afternoon, we should be over deep water heading for the Commander Islands and new species to look for include Laysan Albatross, Mottled Petrel and the Fork-tailed Storm-Petrel. The Kamchatka Trench can also be excellent for cetaceans and we have previously seen Blue Whales on this crossing.

The wildlife-rich Commander Islands were first discovered by the Commander Vitus Bering when
his ship was wrecked here in 1741. We intend to explore the islands through a combination of landings and Zodiac cruises. Our first stop will be the village of Nikolskoye, where we will visit one of the only museums in the world to display a skeleton of the famed (but now extinct) Steller’s Sea Cow. Zodiac cruising is often spectacular and we hope to encounter Red-faced Cormorant, Red-legged Kittiwake, Pigeon Guillemot, Horned Puffin, as well as Parakeet, Crested and Whiskered Auklets, and Sea Otters. Our plans also include a ship cruise along the southern coast of Bering Island, as this area is excellent for cetaceans with Humpback, Sperm, Northern Minke, Orcas and Baird’s Beaked Whales all regularly encountered. Weather will determine where and when we can land, but there are a number of very interesting sites nearby including Medny Island and Commander Bay where Vitus Bering died after his ship was wrecked here.

Verkhoturova Island has some huge seabird colonies which we plan to get close to by following a short, but steep trail to the clifftop. We expect to enjoy some fantastic views of Tufted Puffins, Brunnich’s Guillemots, Pelagic Cormorants and Black-legged Kittiwakes. Both Steller’s Eider and Harlequin Duck occur here too, and we may also see some Steller Sea Lions, as they are often hauled out on offshore rocks. In the late afternoon we will either Zodiac cruise, or land on the Govena Peninsula in the Koryaksky Reserve in search of the Kamchatka Brown Bear. There is a high population of bears here and our landing often depends on whether or not they are patrolling the beaches.

Once a thriving settlement built around a fish factory and fur farm, the fiord system of Bukhta Lavrova was abandoned decades ago after much of the southern Govena Peninsula was declared a state reserve. Now in ruins and reclaimed by nature, this wildlife-rich and rarely visited location is home to Kamchatka Brown Bears, Steller’s Sea Eagles and Largha Seals. During our morning Zodiac cruise we expect to enjoy numerous wildlife encounters as we head down to the wreck of the Soviet
refrigerator ship, the Krechet (Gyrfalcon), which came to grief on the rocks just off the fish factory in 1978, and explore the remains of the farm and factory. This afternoon we plan to explore one of the region’s most spectacular fiords Tintikun Lagoon. This fiord was blocked by a large terminal moraine during the last period of glaciation. A shallow river surrounded by jagged mountains, glaciers and
forested slopes has breached the moraine, allowing access to one of the most picturesque locations found anywhere in the world. We take the Zodiacs onto the lagoon and intend to make several landings with Eurasian Nutcracker, Dusky Warbler, Siberian Rubythroat and Siberian Accentor amongst the possibilities. There is also a large population of brown bears and these should be feeding in and around the river mouth that drain into the head of the lagoon.

Today we plan to Zodiac cruise and land on the remote, scenic shores of Bukhta Yuzhnaya
Glubokaya near Novoolyutorka on Kamchatka Peninsula’s eastern coast. Surrounded by soaring, saw-toothed ridges and spectacular peaks, it provides a dramatic backdrop for our explorations.
While Zodiac cruising we will be looking for Largha Seals, Harlequin Ducks, Tufted and Horned Puffins and Kamchatka Brown Bears. Planning to land near the base of a stream cascading down the mountains in a series of falls and torrents, we will walk through alpine meadows and, at lower elevations, stands of Alder trees as we look for wildlife. Our path upwards will follow the edge of the stream above the trees where panoramic views of the fiord below await.

Along the Koryak Coast there are many beautiful fiords (bukhtas or bays) and none are more beautiful than Bukhta Natalii. This fiord has two smaller fiords that drain into it from the south –
Bukhta Pavla and Bukhta Petra (named after St Peter and St Paul by Commander Vitus Bering). We plan to cruise to Bukhta Pavla and make a landing. This will be a great opportunity to explore the inland as we hike from one bay to be picked up by the ship in another. The magnificent mountain landscapes and tundra vegetation will surround us, along with the possibility of sighting Snow Sheep, as they are often seen in the area. There is a historic walrus haul out on Bogoslova Island which guards the entrance to these fiords.

The village of Meinypil’gyno, located on a 40km long shingle spit, is the most important site in the world for breeding Spoon-billed Sandpiper. Members of the Spoon-billed Sandpiper Task Force monitor about 15 breeding pairs here. We will be guests of the Task Force and if it is possible we will be guided to one of their monitored nests. The area is extremely rich in other wildlife, so we may also find Emperor Goose, Pacific Diver, White- billed Diver and Sandhill Crane. The lagoon entrance often has Largha Seal, Gray and Beluga Whales, and a spectacular number of gulls. The community is very welcoming and boasts a traditional amateur dance group and small museum that is well worth a visit.

We start the day with a visit to the delta of Pika River – a well known walrus haul out and one of the
few places in the southern part of the range where thousands of animals huddle on the beach. As the animals regularly move between locations, finding them can sometimes be a matter of luck, although we have had success here in the past. In the afternoon we hope to visit a well-known walrus haul out lying between Meinypil’gyno and Cape Navarin. Cape Navarin marks the place where the land bridge to North America began when sea levels were much lower. Because of strong tides around the cape
there is an abundance of food and it is not uncommon to see large numbers of seabirds and good numbers of Gray Whales congregating here. We also plan a landing in Bukhta Gavriila. The bukhta (or bay) was named after Commander Vitus Bering’s ship, the St Gabriel of the First Kamchatka Expedition. Behind the expansive beach there is a lagoon we can explore for waterfowl and waders. We may also visit the Chukotka’s oldest, and the Arctic’s southernmost, weather station which now sits abandoned.

As we sail north to Whale Bone Alley on Yttygran Island the day is filled with lectures, opportunities
to spend time on deck, relaxing in the ship’s bar and catching up with some reading or downloading and editing photos.

The Gil’mimyl Hot Springs are our first landing planned for the day. A short walk from the coastline, these natural hot waters are well worth the effort. There will be a chance to explore the tundra for birds, plants and animals as we walk to and fro. After a soak in the springs we will re-join the ship
and sail over to Arakamchechen Island, just north of Cape Chaplino and separated from the Chukotka mainland by the 8-kilometre-wide Senyavina Strait. Having watched Gray Whales feeding here previously, we recommend being out on deck as we slowly cruise through the strait. On Arakamchechen Island we will explore the lush tundra and, if they are present, view the prominent
walrus haul out from the cliffs. This afternoon we plan to visit one of the most significant and intriguing archaeological sites in the Arctic on Yttygran Island. This place is known affectionately as
‘Whale Bone Alley’ due to the large number of whale bones spread along the beach in the form of a pathway. The site dates to the 14th Century and its origins and purpose have been the cause of much debate. It was almost certainly a ceremonial site as well as being used for meat storage. What is puzzling is the lack of any substantial settlement in the vicinity, which suggests that it was possibly a communal site situated here because of the abundance of whales nearby.

We will be cruising along the south coast of Chukotka today and plan to stop at Presbrazhenya Bay. This is an excellent opportunity to Zodiac cruise some spectacular bird cliffs, as long as sea conditions permit we will get in close for some great photographic opportunities. There will also be
a chance to land at a hunting camp (and boat haul-out area) at the nearby village of Nunligren, later our on-board team of naturalists and biologists will offer some lectures and presentations.

As we cruise into Anadyr Bay, there is an excellent chance of seeing more Beluga Whales and after a final breakfast on board, it will be time to disembark. We will provide complimentary transfers to a downtown hotel or the airport. Those returning to Nome will join a charter flight that will depart Anadyr around midday and, because of the International Date Line, will arrive back in Nome on the evening of the previous day. However, we strongly advise that you do not book any onward travel from Nome until the following day to allow for possible delays in the charter flight. Those returning to
Moscow can either be transferred to the airport or hotel in Anadyr, depending on their flight times. You can extend your stay here, although there are limited opportunities as there are virtually no roads in, or around, this town, although the river provides access into the interior of Chukotka. Any excursions in the region need to be planned well in advance of your visit as special permits, permissions and arrangements will be required. 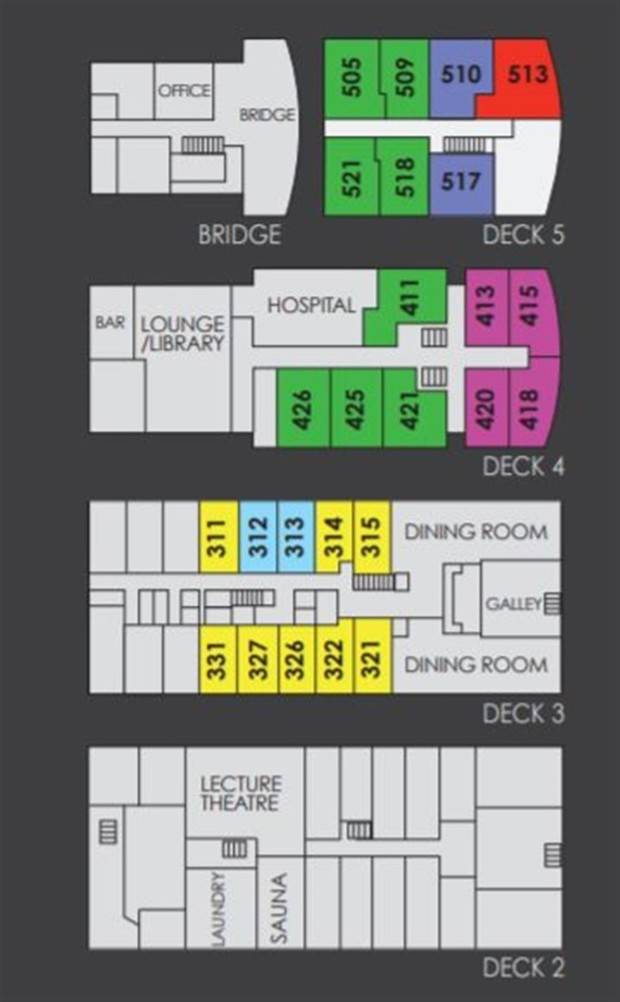 *During our voyage, circumstances may make it necessary or desirable to deviate from the proposed itinerary. This can include poor weather and/or opportunities for making unplanned excursions. Your Expedition Leader will keep you fully informed.